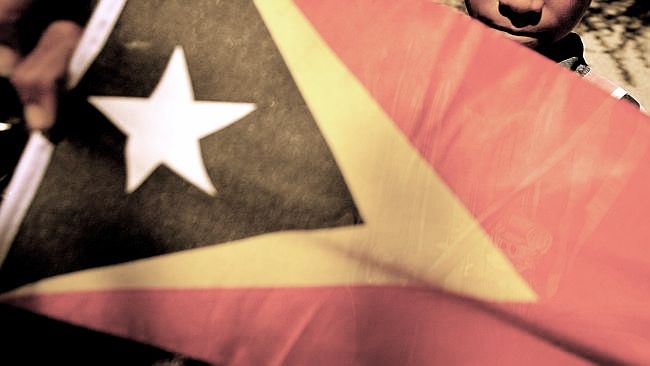 While revelations about NSA mass surveillance dominated the news in late 2013, a less well-publicised scandal was engulfing the Australian intelligence services, which had just raided the offices of a lawyer representing the small nation of East Timor in an international case against Australia.

The case concerns allegations that Australia spied on East Timor’s cabinet during sensitive commercial negotiations over oil and gas revenues. If true, this was spying on the basis of greed, to exploit the unequal relationship between Australia, a rich, developed country, and East Timor, a newly established state emerging from decades of violence and oppression.

The case exposes shocking conduct by Australia – a member of the Five Eyes intelligence-sharing arrangement - and aptly illustrates the need to reign in intelligence services to bring them within the international rule of law.

In April 2013, East Timor initiated proceedings in the Permanent Court of Arbitration – an international dispute resolution organisation – arguing that Australian intelligence services spied on its cabinet during negotiations in 2004 on an agreement over sharing lucrative oil and gas revenues from an area of sea between the two countries.

The history of the 2006 treaty that resulted and its forerunners is complicated; the end result was 50/50 sharing of the revenues between the two nations, but with a provision preventing a redrawing of maritime boundaries for up to fifty years; the current boundary lies in Australia’s favour.

East Timor claims that the treaty was invalid because “Australia did not conduct the [treaty] negotiations in good faith by engaging in espionage”. East Timor’s lawyer, Bernard Colleary, contends that:

He further has argued "[This work] was well outside the proper functions of ASIS. Our Australian people don't expect their espionage service to be assisting revenue deliberations and commercial negotiations between partners.”

If these allegations are true, it’s hard to see how bugging the East Timor cabinet to give Australia a commercial advantage in negotiations over oil and gas revenues is in line with the traditional reasons advanced for intelligence gathering: there was no terrorist threat, nor risk to Australia’s national defence or security.

The suggestion that an aid project was used as a cover for installing bugging devices is particularly damning: misuse of an aid organisation for spying obliterates any idea that the Australian intelligence services respect the need for neutrality in aid work. This type of action can put aid workers at risk of retaliation, erode the trust they have built in the communities where they work, and damage their ability to work with government bodies.

Events took a dramatic turn in December last year when the Australian Security Intelligence Organization (a different part of Australia’s intelligence apparatus) raided Mr Colleary’s home – which is also his office – while he was out of the country.

The ASIO seized “documents and electronic media” on the grounds that they “contained intelligence related to security matters”. Mr Colleary is reported to have said that the documents “include evidence of Australia inserting listening devices into the wall of the East Timor government's cabinet room ahead of the negotiations”. The home of a former Australian spy, who was due to testify in the case, was also raided and his passport seized by Australian authorities. This ex-spook, turned whistleblower, is thought to be the former director of technical operations at the ASIS.

In response to these actions, East Timor initiated proceedings in the International Court of Justice – a United Nations court that adjudicates disputes between states – to recover the documents and data. It also asked for “an assurance that [Australia] will not intercept or cause or request the interception of communications between Timor-Leste and its legal advisers, whether within or outside Australia or Timor-Leste”.

The Court heard the case in January. There, Australia’s lawyer presented a contradictory argument: while the raids were not an attempt to sabotage East Timor’s case in the Permanent Court of Arbitration, Australia did intend to prevent the “disaffected former [intelligence] officer” from testifying. The Court’s judgment (including on the question of whether it can even look into the matter) is expected within the next 12 to 18 months. Despite the narrow issues in the case, there is an outside possibility that the court may make comments on the underlying issue of espionage.

A matter of sovereignty

East Timor, a small developing country of just over a million people gained independence from Indonesia in 2002 and relies on oil and gas revenues, which amount to billions of dollars, to boost its development fortunes. However, for East Timor, the allegations that Australia may have had an unfair advantage in the negotiations implicate more than just money: as Agio Pereira, the Head of East Timor’s Council of Ministers, has said: “It's not about money, it's about sovereignty, it's about certainty and it's about the future of our future generations. Is very important for Timor.”

Pereira raises the obvious point that Australia and East Timor are, ostensibly, friends: “We need to define these boundaries - the way the national interests wears the red line and I think after the Cold War, you need to start to think seriously about who you consider your real enemies, not the virtual ones.”

East Timor’s Foreign Minister, Jose Guterres, echoes this sentiment: “The policies that have been going on for many years - you have to change it. Because it doesn't create trust with the neighbouring countries. No-one will trust any country that does this kind of actions, whether big or small.”

When the East Timor arbitration is finally resolved, it may set an important precedent: that spying during treaty negotiations can render the resulting treaty invalid. This outcome, however, is far from certain. It may be that Australia will argue that the arbitration cannot proceed for technical reasons. Further, proceedings in the Permanent Court of Arbitration are generally private and its decisions are not always made public.

But this is an issue that is not going to go away. While the Permanent Court of Arbitration, despite its name, is not technically an international court, the arbitration is important because – if it proceeds to the substance of East Timor’s claims – it will be one of the few instances in which an adjudicatory body has considered espionage and its relationship to international law. This is an area that domestic and international courts will inevitably be forced to look into in more detail, as the legal ramifications of the Snowden revelations become clearer.