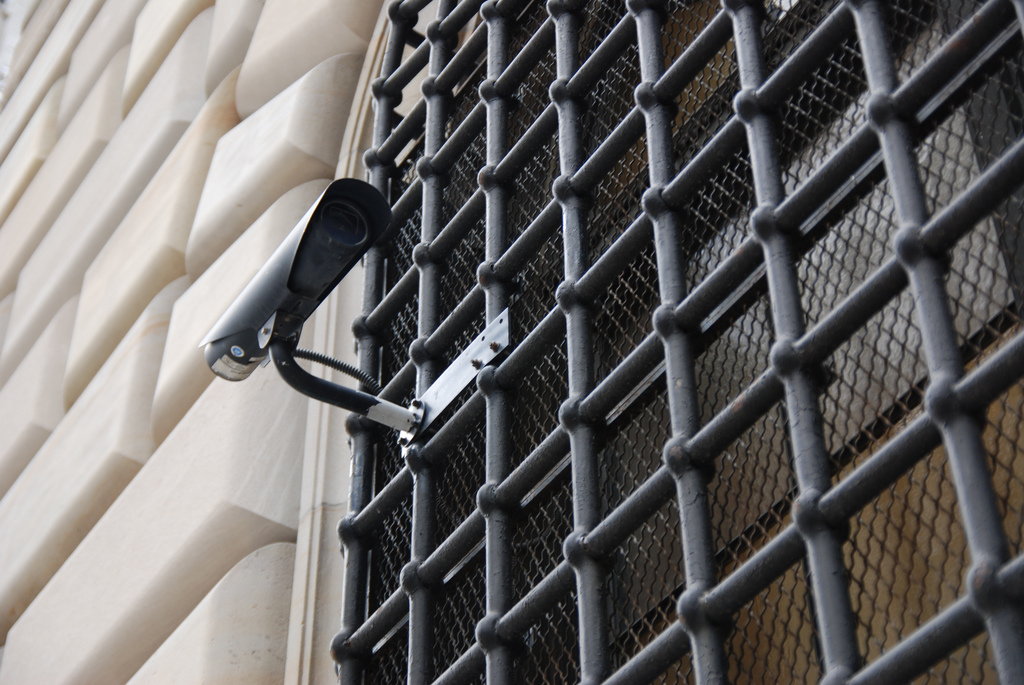 CCTV (Closed Circuit Television) is a visual surveillance technology designed for monitoring a variety of environments and activities. CCTV systems typically involve a fixed (or "dedicated") communications link between cameras and monitors.

In the past decade, the use of CCTV has grown to unprecedented levels. In Britain between £150 and £300 million ($225 - $450 million) per year is now spent on a surveillance industry involving an estimated 300,000 cameras. Most British towns and cities are moving to CCTV surveillance of public areas, housing estates, car parks and public facilities. Growth in the market is estimated at 15% to 20% annually.

Many central business districts in Britain are now covered by surveillance camera systems involving a linked system of cameras with full pan, tilt, zoom and infrared capacity. Their use on private property is also becoming popular. Increasingly, police and local councils are placing camera systems into housing estates and red light districts. Residents Associations are independently organizing their own surveillance initiatives. Tens of thousands of cameras operate in public places,; in phone booths, vending machines, buses, trains, taxis, alongside motorways and inside ATMs.

The video surveillance boom is likely to extend even inside the home. Andrew May, Assistant Chief Constable of South Wales, has urged victims of domestic violence to conceal video cameras in their homes to collect evidence. The technology is already being used in hospitals to support covert surveillance of parents suspected of abusing their children.

The limits of CCTV are constantly extended. Originally installed to deter burglary, assault and car theft, in practice most camera systems have been used to combat 'anti-social behavior', including many such minor offenses as littering, urinating in public, traffic violations, obstruction, drunkenness, and evading meters in town parking lots. They have also been widely used to intervene in other 'undesirable' behavior such as underage smoking and a variety of public order transgressions. Other innovative uses are constantly being discovered. When combined with observation of body language, the cameras are particularly effective in detecting people using marijuana and other substances. These systems are used increasingly to police public morals and public order. According to a glossy UK Home Office promotional booklet, 'CCTV: Looking out for you', the technology can be a solution for such problems as vandalism, drug use, drunkenness, racial harassment, sexual harassment, loitering and disorderly behavior.

CCTV is very quickly becoming an integral part of crime control policy, social control theory and 'Community consciousness'. It is promoted by police and politicians as primary solution for urban dysfunction. It is no exaggeration to conclude that the technology has had more of an impact on the evolution of law enforcement policy than just about any technology initiative in the past two decades.

CCTV is a seductive technology. In a public policy domain which is notoriously rubbery, CCTV has a solid, "Sexy" and powerful image. It has become an icon for security and - for politicians - its promotion is guaranteed to create a feel-good response. When people are frightened of crime and criminals, critics of CCTV are often portrayed as enemies of the public interest.

While Britain is clearly the lead nation in implementing CCTV, other countries are quickly following. North America, Australia and some European countries are installing the cameras in urban environments which a few years ago would most likely have rejected the technology.

2. What sort of technology is used in CCTV systems?

The modern CCTV system involves a linked system of cameras with full pan, tilt, and zoom able to be operated remotely from a control room.

These systems may involve sophisticated technology. Features can include night vision, computer assisted operation, and motion detection facilities which allows the operator to instruct the system to go on red alert when anything moves in view of the cameras. Camera systems increasingly employ bullet-proof casing, and automated self defense mechanisms which - as with the Liverpool system - ensure that cameras under attack are covered by neighboring cameras These can be legitimately described as military style systems.

The clarity of the pictures is often excellent, with many systems being able to recognize a cigarette packet at a hundred metres. The systems can often work in pitch blackness, bringing images up to daylight level.

Glowing reports of the effectiveness of CCTV are announced regularly. Strathclyde police in Scotland recently claimed a 75 per cent drop in crime following the installation of a £130,000 closed circuit TV system in Airdrie. Not only are people delighted because they are no longer afraid to go out shopping, say local police, but even criminals welcome the chance to prove their innocence by calling on evidence from the cameras. In King's Lynn, burglary and vandalism in the industrial estate has dropped to a tiny fraction of its original level. Crime in car parks has dropped by ninety per cent. People say they feel safer. Indeed they should. Assaults and other violent crimes appear also to have been decimated in the center of town.

The government believes this is because CCTV deters 'opportunistic' crime, where people take advantage of a situation on the spur of the moment. Phillip Edwards from the Home Office Crime Prevention Unit says the government is using CCTV as part of a long term plan to reduce overall crime. "Today's opportunist is tomorrow's professional criminal. If we decrease the number of opportunities for easy crime, we can reduce the number of people becoming professional criminals".

The logic, and the statistics, are superficially impressive, but some analysts are not convinced. In a report to the Scottish Office on the impact of CCTV, Jason Ditton, Director of the Scottish Centre for Criminology, argued that many claims of crime reduction are little more than fantasy. "All (evaluations and statistics) we have seen so far are wholly unreliable", The British Journal of Criminology went further by describing the statistics as "....post hoc shoestring efforts by the untrained and self interested practitioner ".

The crime reduction claims being made by CCTV proponents are not convincing. Three recent criminological reports (Home Office, Scottish Office and Southbank University) have discredited the conventional wisdom about the cameras effectiveness. In a report to the Scottish Office on the impact of CCTV, Jason Ditton, Director of the Scottish Centre for Criminology, argued that the claims of crime reduction are little more than fantasy. "All (evaluations and statistics) we have seen so far are wholly unreliable", The British Journal of Criminology described the statistics as "....post hoc shoestring efforts by the untrained and self interested practitioner." In short, the crime statistics are without credibility.

The crime statistics rarely, if ever, reflect the hypothesis that CCTV merely displaces criminal activity to areas outside the range of the cameras. One of the features of current surveillance practice is that the cameras are often installed in high-rent commercial areas. Crime may be merely pushed from high value commercial areas into low rent residential areas. Councils often find that it is impossible to resist demands for such systems. There is an additional element of displacement that should be of particularly concern to all communities. Since the growth of CCTV as the primary means of crime prevention, more traditional, community based measures have been discarded.

A Scottish Centre for Criminology report on CCTV in Airdre was unable to rule out displacement as a factor, while various studies in other countries indicate that burglars and other criminals will travel long distances to commit crimes. Discussing the justification for establishing a surveillance system of 16 cameras in Manchester, Gordon Conquest, chairman of the city centre sub committee of Manchester Council, candidly admitted "No crackdown on crime does more than displace it, and that's the best we can do at the moment."

The Crime Prevention Unit of the Home Office appears to agree. In 1993 it suppressed the findings of a survey on the crime impact of camera surveillance on the basis that the displacement effect had been all but ignored. In other words, crime may be merely pushed from high value commercial areas into low rent residential areas. One of the features of current surveillance practice is that the cameras are often installed in high-rent commercial areas. Councils often find that it is impossible to resist demands for such systems. The trend is fueled in part by the insurance industry, which in some towns is offering a thirty per cent reduction in premiums to local retailers who pay a contribution to a CCTV levy system. A nationwide insurance discount scheme is currently being negotiated, and should be in place by 1996.

Some police also concede that CCTV displaces crime. Richard Thomas, Acting Deputy Chief Constable for Gwent, recently told the BBC's Andrew Neil that he believed CCTV pushed some crime beyond the range of the cameras. And in his interview with 20/20, Leslie Sharp said "Certainly the crime goes somewhere. I don't believe that just because you've got cameras in a city centre that everyone says 'Oh well, we're going to give up crime and get a job".

The cameras are also creating a vastly increased rate of conviction after crimes are detected. Virtually everyone caught committing an offense on camera pleads guilty nowadays. Once people know they have been videotaped, they admit the offense immediately. Such is also the case in Newcastle, where the installation in 1992 of a 16 camera system has resulted in a 100 per cent incidence of guilty pleas. Police are delighted at the time and money they are saving from long and expensive trials. Some legal experts are a little more wary of the implications of these results, arguing that - like DNA evidence - juries can be seduced and defendants intimidated in equal proportions by evidence that might not normally stand up to scrutiny. Indeed some districts are now reporting that people are surrendering after the mere mention in newspaper reports that their alleged activities had been captured on CCTV.

4. What does the public think of CCTV?

The picture is mixed. While proponents of CCTV are inclined to describe opposition to the technology as marginal, the reality is much less conclusive. In one survey commissioned by the UK Home Office a large proportion of respondents expressed concern about several key aspects of visual surveillance.

The extent of concern was highlighted by the outcome that more than fifty per cent of people felt neither government nor private security firms should be allowed to make decisions to allow the installation of CCTV in public places. 72% agreed "these cameras could easily be abused and used by the wrong people". 39% felt that people who are in control of these systems cold not be "completely trusted to use them only for the public good". 37% felt that "in the future, cameras will be used by the government to control people". While this response could be interpreted a number of ways, it goes to the heart of the privacy and civil rights dilemma. More than one respondent in ten believed that CCTV cameras should be banned.

Another interesting conclusion of the Home Office survey was that 36 per cent of respondents did not agree with the proposition "the more of these cameras we have, the better". Contrast this with the view of Leslie Sharp, chief constable for the Scotland's Strathclyde Police Department. Referring to his forces mania for CCTV he told ABC news' 20/20 programme: "We will gradually drive the criminal further and further away, and eventually I hope to drive them into the sea".

The most crucial element of the Home Office survey was the conclusion that the public were less inclined to unconditionally support CCTV once issues were raised and discussed within groups.