The European chase for Saharan smugglers 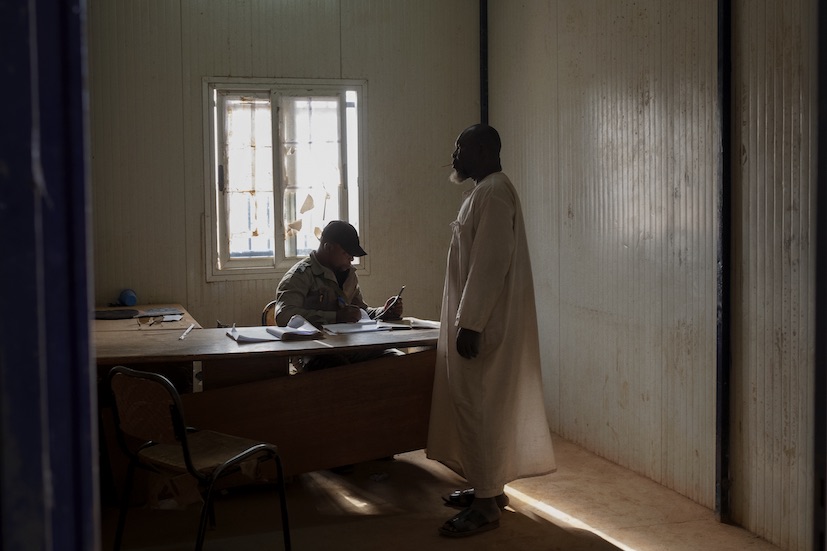 The wars on terror and migration have seen international funders sponsoring numerous border control missions across the Sahel region of Africa. Many of these rely on funds supposed to be reserved for development aid and lack vital transparency safeguards. After Europes's shady funds to border forces in the Sahel area and Niger's new biometric voting system, freelance journalist Giacomo Zandonini looks at the attempts to dismantle smugglers networks in the region, powered by Europe's gifts of surveillance.

It was a quiet evening in Agadez, a bustling Saharan city in the centre of Niger. Thirty-five year old Agali Ahmed was sipping tea at a friend’s place, as he often did, when he received a message: police were at his uncle’s house. When he got there, Ahmed saw men in plainclothes, standing around the building’s gate. Inside, more men were searching the apartment. Three white men, who Ahmed guessed were Spanish, asked for his phone and started taking pictures of him. They told him to follow them. Before realising what was happening, he found himself on the backseat of a Toyota pickup car, handcuffed and blindfolded.

“That’s how they brought me to Niamey, on a 24-hour drive, with no food,'' recounts Ahmed. His family went immediately to the local gendarmerie. “They told them I was kidnapped, because that’s what it was, an abduction, not an arrest,'' he states with anger when we met, weeks after he was released.

Once in Niamey, Niger’s capital city, he realized his uncle had been brought there as well, in a separate car. For eleven days, they were kept under constant surveillance in a cell at the police antiterrorism unit. “They handcuffed and blindfolded us even to go to the toilet: I felt as if I were a jihadist, even though I never killed anyone nor stolen, or sold drugs,” Ahmed says.

Only when he was transferred to jail, after a long interrogation, did he realise he was being charged with smuggling migrants, an offence introduced in Niger in 2015, under significant European pressure. On top of this, he was also accused of being part of a criminal conspiracy.

“My uncle’s phone was under control, that’s why they caught me,'' says Ahmed, who previously drove migrants to Libya but said he had quit several months earlier, after risking his life on a remote trail to avoid being detected. At the time of the arrest, he says, he was working with a local NGO.

Inside Niamey’s prison, Ahmed met with other people, some of whom he knew from Agadez. Among them were smugglers and middlemen such as Abdallah ‘Malohiya’ and Alhagie Gambo who, together with his uncle Ajja Al-Jouma, better known as ‘Oga Bouzou’ - the ‘Tuareg boss’ in the Hausa language - were some of the most-known actors in the city’s once thriving migration business.

Between October and November 2018, in the span of just a few weeks, at least ten people considered high-profile criminals have been arrested in Agadez and Zinder, a southern Nigerien city on the busy route connecting Nigeria to Agadez.

The operation was presented as one of the major successes of a European Union-funded joint investigative team, aimed at tackling smuggling networks in a key country for migration movements from West Africa to Libya, Algeria and, eventually, Europe.

A few years earlier, while Libya’s role as a buffer zone to contain migrants potentially heading to Europe - via Italy - was jeopardised by the dramatic end of Muammar Gaddafi’s iron-fisted regime, the EU Commission started planning to act south of the Sahara.

Niger, a transit country for citizens from coastal, richer states - such as Senegal, The Gambia, Ivory Coast, Guinea, or Nigeria - heading to the Maghreb, was the ideal partner for this project. And Agadez – or as international media soon labelled it ‘the crossroads’, ‘the turning table’, ‘the trafficking hub’ - was the place to be in order to “dismantle smuggling networks” (a favourite catchphrase of most European leaders) carrying people across the desert.

For the Nigerien government, this was a unique chance to strengthen its legitimacy and attract funds that had started pouring in right after the EU-Africa summit in La Valletta, Malta, in November 2015.

FIIAPP: from cooperation to security management – the Spanish way

Led by the Fundación Internacional y para Iberoamérica de Administración y Políticas Pública (FIIAPP), a branch of the Spanish international cooperation, the joint investigative team is just one of 12 projects funded since 2015 in Niger through the EU Trust Fund for Africa. It received an initial contribution of 6 million euros, renewed until 2021 with a further 5.5 million. A total of 253 million euros have been devoted to Niger as a whole, mixing local development with hard borders, security with humanitarian aid. Out of 26 countries touched by the Fund, only Libya has received more money so far.

The concept beyond the project is easy: three Spanish police agents and three French police agents support 12 Nigerien colleagues to investigate and prosecute smuggling networks. Technologies such as wiretapping equipment and digital GPS maps, go together with expertise and supervision.

The project’s launch, in December 2016, coincided with a growing pressure on smuggling actors in Agadez. Drivers and middlemen found with foreign passengers were arrested. The European-supported team contributed to the majority of these apprehensions. By the summer of 2019, FIIAPP indicated that 59 networks had been dismantled, 246 people jailed and 57 vehicles, mostly pickup trucks, seized.

The Autumn 2018 operation was considered the peak of a successful season. Right after, a press release by the Spanish police reported that “two of the biggest traffickers in Agadez and Zinder have been arrested”, without mentioning any names. Months of interceptions and letter rogatories to obtain bank information in Nigeria, showed that the two traffickers had an annual turnover of about 250,000 euros a year.

At the time of publishing, neither the Spanish police nor the EU delegation to Niger has replied to requests for information about equipment acquired through EU funds and the results of the investigative work. Still, according to a 2019 note by the Spanish minister of interior, “the joint investigative team holds a central role in curbing irregular migration to Europe along the so-called Nigerien route''.

Local media, on the other hand, showed little interest. A former smuggler argued that “people as Abdallah Malohiya and ‘Oga Bouzou’ were too well-known to be gossiped about”. Thanks to their political connections, he explained, they were offered free rein to move foreigners in and out of Agadez, using well-oiled bribing schemes.

“While many of us had left the job, they were the ones continuing, even security agents would let them pass by,'' said the man. Ajja Al-Jouma, he adds, was known as “the one bringing Nigerian girls, those who became prostitutes”.

The arrest was indeed a genuine blow to the Agadez migration market, centred around the management of ghettos - informal reception facilities to lodge travellers - and transportation services across the Sahara to Libya or Algeria. An activity where contacts were crucial. And the 2018 suspects, said their ex colleague, had the right ones: middlemen, recruiters, public officials, militiamen between Nigeria, Libya and other Nigerien cities.

Investigative tools donated to the Nigerien police, such as phone tracking and wiretapping systems, proved to be essential to gather intelligence on smuggling networks and actors, and conduct operations.

This equipment, however, is but a small part of European donations to Niger’s security forces, focused on improving border control. In 2017, Germany offered dozens of vehicles to the border police of the country. Over the last three years, through the Rapid Action Group in the Sahel – yet another EU-funded project run by FIIAPP - the Nigerien gendarmerie received ten flatbed cars and three armoured vehicles, designed for installing weapons, plus surveillance drones, quads, and motorbikes. The EU Commission refused to disclose information on equipment given to a new border control mobile company, set up through German and Dutch funds and launched in 2019.

Besides supporting operations by border security forces, European donors funded also data collection system. The Migrant Information and Data Analysis System, a migration databases partially funded by the EU and installed at land borders, might interact in the near future with the West Africa Police Information System, a criminal database funded by Brussels to gather and share biometric information in 17 countries in West Africa. Frontex, the EU border guard agency, will be able to analyse a part of this information.

While the Spanish police might have overstated when declaring that “no vehicle could leave Agadez without the arrested trafficker’s consent”, there is no doubt that Al-Jouma, Malohiya, and Gambo were top players in a business that, according to the Agadez regional council, used to produce about 90 million euros of annual revenue in the region.

“With this arrest, all big networks in Agadez were dismantled,'' stated Seiny Saidou, the city’s top prosecutor.

But was that really the case?

As this case shows, European dreams to control people’s movements might clash with local realities. In fact, despite charges that could lead to much longer prison terms, nine of the suspects - including Agali Ahmed - were released between October and November 2019, only one year after being arrested.

Ahmed, who describes himself as the small fish who paid an unjust price for its connections, is trying to rebuild his life in a world where, he says, “connections are everything, even when you’re looking for a decent job”. The three former smuggling kingpins in Agadez, on the other hand, might just reshape their old, profitable activity.

It might be true that “now smugglers are afraid of our technical devices”, as a police official boasted to us in Agadez. Still, as a former smuggler told us, “those who replaced Malohiya and his colleagues, mostly foreigners, became very careful about their communications: they use foreign SIM cards, change phone and location constantly,”

Given the fragile setting and the continuous demand for smuggling services, fighting smugglers in the Sahara as if they were a Mafia group, just might not work.

As underlined by a recent report by the International Crisis Group, if “disrupting trafficking in the Sahel is a strong domestic imperative for European governments, taking further aggressive steps to do so could upset conflict management arrangements” in the vast region of Agadez, which is home to two armed rebellions in the last thirty years. European interventions, adds the publication, “should minimise risks that efforts to curb migration and Islamist militancy destabilise Niger and potentially fuel the trends they aim to counter”.

While exposing one side of multi-layered European and Nigerien policies to contrast people’s smuggling, the case of Malohiya, Gambo, Al-Jouma, and Ahmed, shows the limit of a repressive approach. “Europeans pushed to arrest them and after a few months, Nigerien prosecutors rolled out the red carpet”, one official at Niger’s central Court of Justice told the author of this piece.

Meanwhile, travellers are continuing to reach Agadez to head to Libya and Algeria, via minor routes. “While many drivers and ghettos managers quit the job out of fear of being arrested, others reorganized: even if undetected, migrants are continuing to pass by,'' said an ex smuggler.

For Ahmed, this is just an old memory. Like many former colleagues, he roams the streets of Agadez to find a new job, while fighting to overcome a creeping feeling of injustice.

[In the photo: A border police officer sits at the desk of one of the control posts for those crossing the border, inside the border post of Makalondi, at the Niger-Burkina Faso border. Photo by Francesco Bellina.]