Since the May 2020 murder of George Floyd, Minnesota law enforcement agencies have carried out a secretive, long-running surveillance programme targeting journalists and civil rights activists known as Operation Safety Net, a complex surveillance engine that has expanded to include collecting
Continue reading

According to internal documents obtained by the Brennan Center, the Polish “strategic communications” specialist Edge NPD, whose business is helping companies with market research, provided the Los Angeles Police Department with a free 40-day trial in which it collected nearly 2 million tweets
Continue reading

According to internal documents, the San Francisco Police Department illegally spied on thousands of Bay Area residents protesting in 2020 against the murder of George Floyd and racist police violence. To conduct its surveillance, the SFPD used a network of more than 300 video cameras in downtown’s
Continue reading

At his 2021 trial, prosecutors used previously-unseen infrared footage from FBI airplane surveillance at 9,000 feet to attempt to show that 18-year-old Kyle Rittenhouse chased one of the two people he later claimed to have shot in self-defence. Rittenhouse travelled from his home in Illinois to
Continue reading
Press release

Today, the High Court ruled that the Home Secretary acted unlawfully and breached human rights and data protection laws by operating a secret, blanket policy of seizing, retaining and extracting data from the mobile phones of asylum seekers arriving by small boat. This claim for judicial review was
Continue reading
News & Analysis 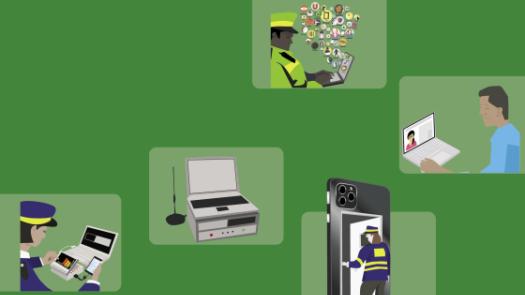 An overview of your data rights in relation to data processed by the police at protests (UK edition).

Fact sheet on photographing police officers at a protest

An overview of relevant considerations if and when photographing or filming police at a protest (UK edition).

A case study illustrating the use and looming dangers of collection and use of biometrics in the name of counter-terrorism.

Biometrics and counter-terrorism: Case study of Iraq and Afghanistan

A case study illustrating the use and looming dangers of collection and use of biometrics in the name of counter-terrorism.

A brief guide to how social media monitoring can be used at a protest, and how you can minimise risks to your data (UK edition)

The police can access your mobile phone’s ‘unique identifiers’. Learn how to maintain your anonymity (UK edition).

How the police can access your digital communications at a protest

The police can access your digital communications. Learn how to limit the risk.

How the police can determine your location at a protest

If the police seize your phone during a protest, they can gain access to your location data. Here's how to better control access to your data (UK edition).