It's a big question, have you purchased a card for your local surveillance camera on Surveillance Camera Day?

Yes, Surveillance Camera Day is a real thing and happens on 20 June.

Perhaps your local community could create a bingo card to see who knows where all the local cameras are. Are there any on your local bins, how about the lampposts or a billboard?

Have you had a facial recognition van in your local community? Did you see the police helicopter crew video camera filming you sunbathing naked?

Maybe your own baby monitor has been hacked and a stranger is watching your baby. BINGO! 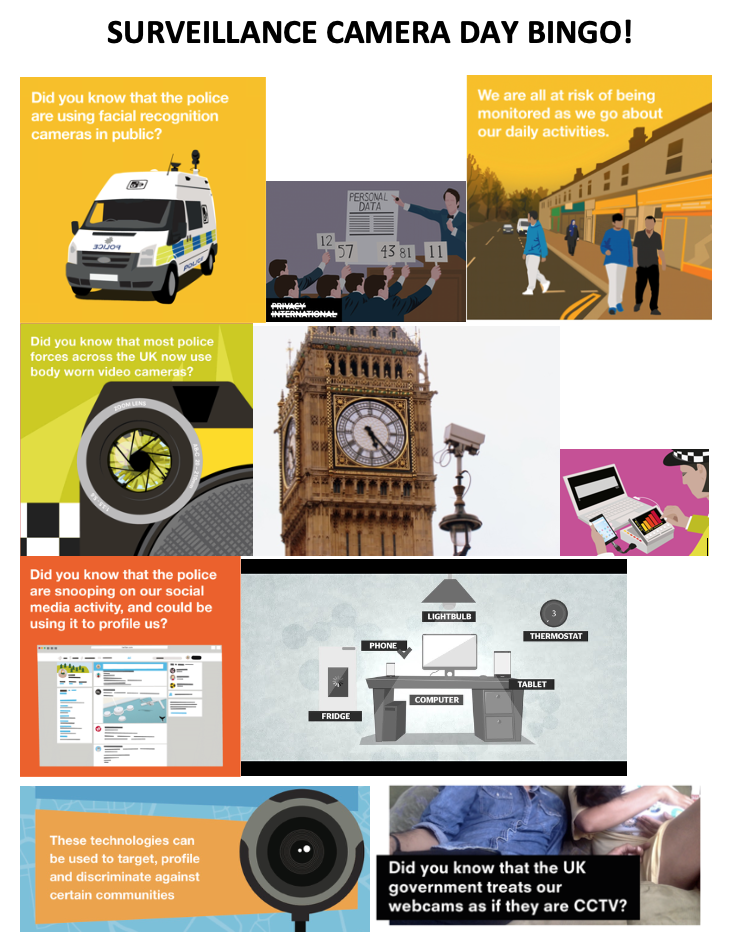 The UK government are promoting the so-called 'Doors Open' initiative on 20 June, intended to encourage organisations to open their doors to the public, giving them the opportunity to "see firsthand how they are run to keep communities safe and secure whilst not intruding on their privacy".

Given the pervasive nature of the tracking of our daily lives, focusing just on surveillance cameras, rather than all the other ways private companies, shopping centres, TFL, oh yes and the UK government track our movements and collect masses of personal data on us fails to give communities the whole picture. From WiFi, bluetooth and GPS tracking to social media surveillance, the ability to live our lives with autonomy and away from corporate or the government's gaze is disappearing.

What can you do

If you are planning to take advantage of the Government promoted 'Doors Open Initiative' to visit the control rooms of organisations, we've come up with a few questions you might want to ask below.

Privacy International (PI)  have also launched our Neighbourhood Watched campaign to demand transparency over the use of new technologies by police. We would love you to take part and mark Surveillance Camera Day by opposing unlawful surveillance and demanding transparency.

Write to your local Police and Crime Commissioner (PCC), sharing your concerns about police tech and making sure that your local police force is held to account. 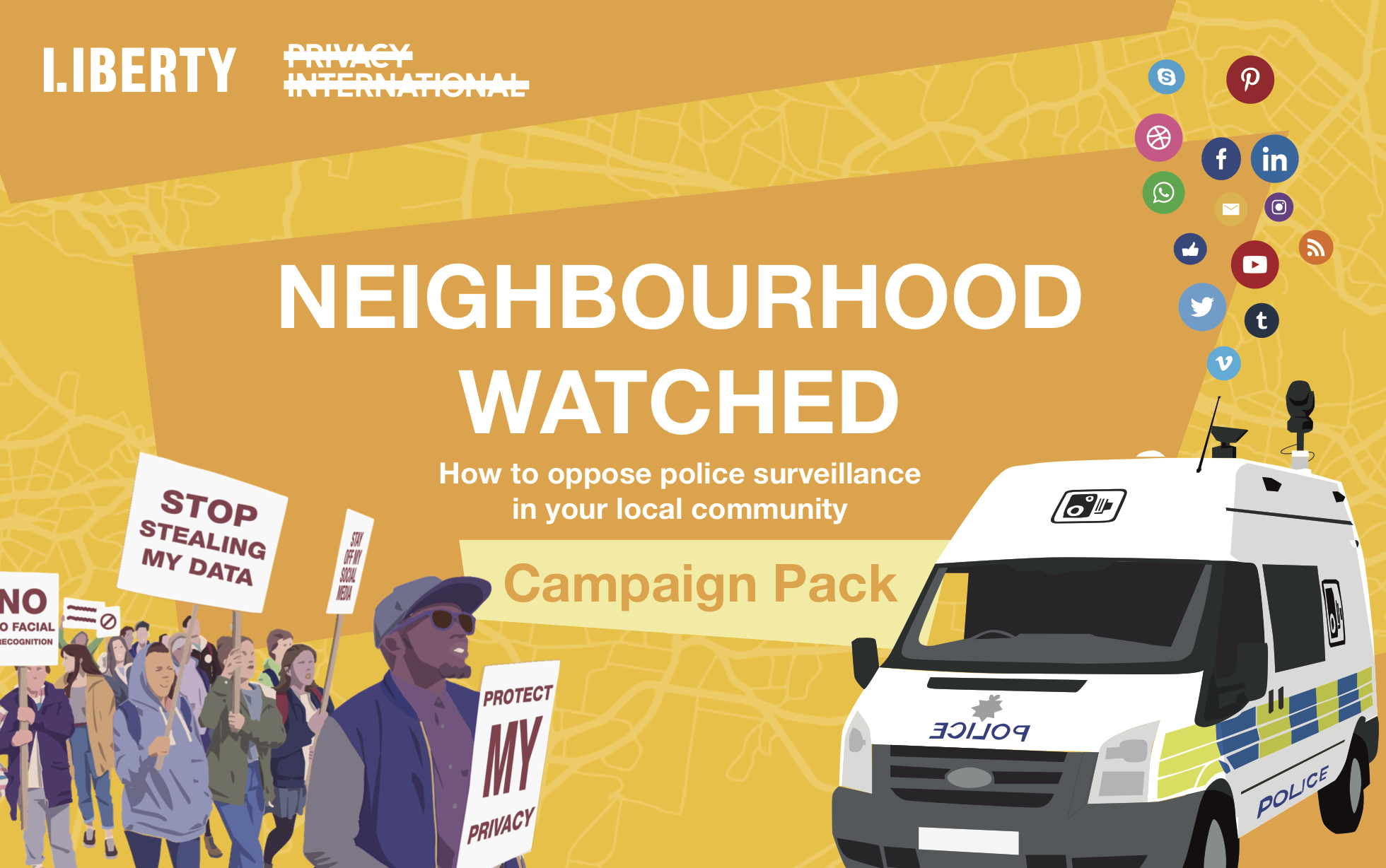 And if you don't have a sticker on your laptop camera, we think this simple measure is another good way to mark Surveillance Camera Day, with the obligatory shout back to Optic Nerve, and all that 'undesirable nudity' GCHQ harvested through webcam interception.

So why might we be worried about surveillance cameras

When we think about surveillance cameras, CCTV might be at the forefront of our minds. However, surveillance cameras may be invisible to the naked eye, such as those reportedly used to spy on shoppers in Boots, Asda and Tesco; enabled with facial recognition technology; watching us at supermarket checkouts or estimating our age and loyalty status while queuing.

In a report published last week, the American Civil Liberties Union imagined dystopian cases, where "video analytics" technologies could be used by the government to monitor political rivals, by corporations to deprive consumers of benefits based on their habits or by the police to monitor citizens' behaviour and predict crime.

These dynamics will continue to reverberate as technology continues to accelerate, from facial recognition to gait and voice recognition. From systems that are linked, to sensor and video surveillance technologies with complex reference databases, these are arguably capable of being more intrusive than authorised covert surveillance.

Why the problem goes beyond surveillance cameras

The use of surveillance cameras in civic spaces, raises serious concerns. It can chill and violate not only our privacy rights but also our right to express ourselves anonymously, to attend public gatherings, to participate in peaceful protests or to engage in controversial dialogue. As the Surveillance Camera Commissioner put it,

At the same time, police and intelligence agencies are expanding the depth and breadth of their surveillance of our civic spaces, often without sufficient legal basis or democratic input and oversight. While new technologies may be deployed under the guise of protecting democratic society, without adequate regulations and safeguards, those technologies can threaten democratic participation and dissent and thereby undermine democracy itself. This is not to say that new technologies should never be used; but the use of intrusive technologies requires transparent and robust oversight. 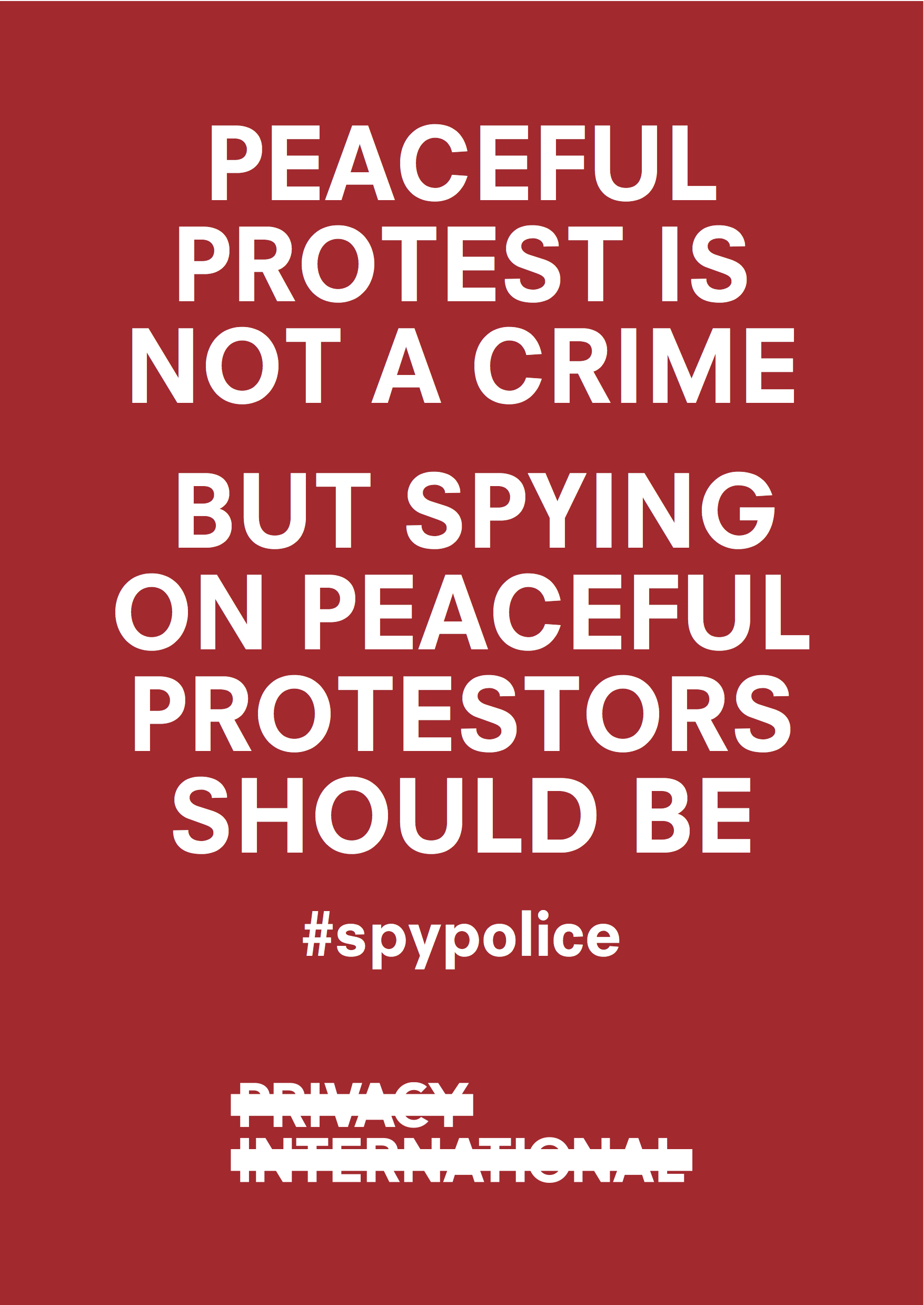 The government keeps insisting that there is no need for a new regulatory framework. In their view, existing privacy and data protection laws set out a clear path and provide sufficient guarantees regarding the use of surveillance cameras both in public and private spaces.

But, as the Surveillance Camera Commissioner also underlined, we believe that existing frameworks fail to address all of the concerns raised by these camera surveillance platforms. Current statutory frameworks, such as the Investigatory Powers Act 2016 or the Data Protection Act 2018, do not provide adequate legal justification or appropriate safeguards for such surveillance techniques.

The operation and use of new surveillance technologies should be transparent, regulated, targeted based on reasonable suspicion, designed to minimise impact on our digital security, and subject to effective and independent control and supervision.

Surveillance cameras not only dominate public spaces, increasingly we bring a plethora of cameras into our homes through internet connected devices. Privacy International have repeatedly raised the issue of software and hardware security, which could render cameras vulnerable to cyber-attacks and data breaches by unauthorised third parties. The ease by which baby monitors can be hacked and security cameras are vulnerable to being viewed live by thousands of strangers are only just some terrifying examples.

Privacy International is working to ensure new technologies are governed and used in ways that protect our privacy, and support democracy.

Questions to ask at Open Doors

1. What are the different forms of surveillance cameras you use e.g. CCTV, facial recognition, body worn cameras, ANPR

2. Is it obvious to the public where these cameras are and how they are being used?

3. Do you inform individuals about their rights in relation to the collection of their personal data? Specifically, how can people obtain access to footage depicting them or ask to have it erased?

4. Do you have policies and guidance in place?

5. On what basis do you believe what you are doing is lawful?

6. How long to you keep the footage for and why?

7. Is this footage disclosed to any third parties and for what purposes?

8. Is the footage combined with any other data to create profiles/datasets on individuals?

9. How do you deal with risks associated with insecurities in software and hardware? “...a mobile device is now a huge repository of sensitive data, which could provide a wealth of information about its owner. This has in turn led to the evolution of mobile device forensics, a branch of digital forensics, which deals with retrieving data from a mobile device.” The situation in
Continue reading
News & Analysis

We look at the recently published report on forensic science in the UK, highlight concerns about police not understanding new tech used to extract data from mobile phones; the risk of making incorrect inferences and the general lack of understanding about the capabilities of these tools. The
Continue reading